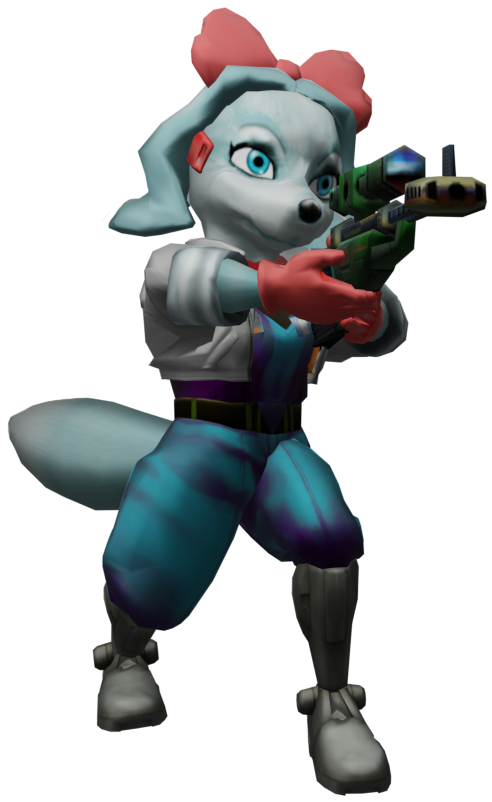 Fay is a weapons specialist, lost in time. Though she’s only made an official appearance in the forgotten Star Fox 2, Fay feels both familiar and completely new. Her moveset is inspired by Fox from the original Super Smash Brothers, with tons of new twists. Most notably, her specials, like her sniper… The P.A.W.P. Fox, Falco, and Wolf all have iconic blasters, but they can’t hold a candle to the P.A.W.P. She isn’t always stuck with a slow sniper, no, she can switch to a weaker version of Falco’s laser. Hold B and A to swap between the pistol and the sniper! This swap is also useful for turning Fay around in the air. Her Shine is unique from the other spacies, sending neatly up and behind her to set up for brutal combo sequences. Fay’s up special is definitely the least flexible of the space animals’, as it’s only able to move straight up. However, you can charge it by holding B, allowing you to mix up your recovery distances. You might be thinking, wow, that recovery sucks. Nah. It’s bitchin. Sidespecial is a recovery move, much like it is for other spacies, but this one is really, really different. Blast yourself with your own rocket back to the stage with this flexible yet extremely self punishing recovery option. Better get good at wall jump teching! It’s also a fun little projectile onstage, but using it isn’t really a threat. Her sidespecial isn’t the only place her missile launcher is used. Her up air, down air, and back air put the hefty weapon to good use, blasting opponents upwards and downwards, and launching them sideways with a powerful thwack. Fay isn’t your everyday spacie, but she’s still part of the Star Fox family, and you’ll feel that when you play her soon. 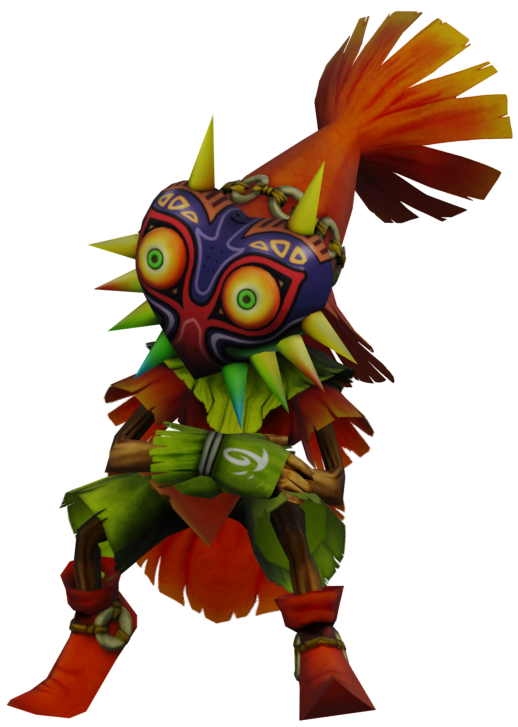 The tricky terror of Termina wreaks his havoc on the Beyond Melee cast with his speed, and mischievous mix ups. His counter is actually a curse, planting a poisonous flower on his opponent’s head, but the counterplay is what you’d expect… Except for one thing. Skull Kid’s side special looks like his counter, but don’t be fooled! Try to punish it, and you’ll be hit away just before he teleports to safety. You’ll have to be ready for Skull kid’s tricks. Being ready for Skull Kid will be hard, though. He’s fast, making an escape from his wrath difficult. He’ll control a ton of space by threatening with his float, which ends when he uses aerials. Next, neutral special is a mine of darkness. Press B to spawn it, then throw it with A or the c stick. Tap the B button again to make it explode and set up for unique combos. Control space with your mine, making it all the more clear that nowhere is safe from Majora’s wrath. Finally, his up special is a teleport that can move vertically up or down after a quick jump, allowing him to recover from well below the stage. His smash attacks hold startling range for a character as small as him, reaching similar distances to Marth with his dangerous tendrils. Skull Kid’s up air and bair aren’t too out of the ordinary, except for the fact that they both turn him around in the air. Not only does he have a float, but you’ll need to be ready for any attack to come at you from any direction. For the rest of his kit, every single move is extremely fresh. Nothing is borrowed. Everything is original, and everything inspires dread. Skull Kid will take your stock, it’s only a matter of time. 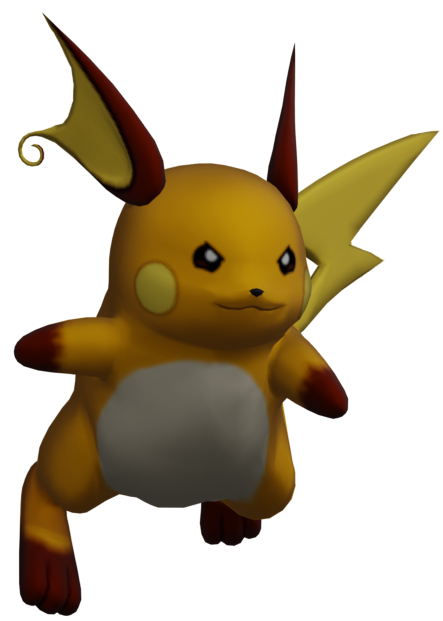 Raichu isn’t just a Pikachu clone. Almost all of his moves are entirely new, but stay true to the spirit of the Pikachu lineage. His neutral special is Electro Ball, a strong projectile that’s slow to come out, slow to travel across the stage, but if it hits you you’re likely to be combo’d to death… You’ll quickly see this is a pattern with this character. At first, his Up Special will seem very similar to Pikachu’s, but under the hood it works much differently.. It has a longer startup, and only has a hitbox at the end of the zip. If you hit with this hitbox, you can cancel your up special into a jump, aerial, or airdodge. Side special is similar to Pikachu’s in the air. On the ground, however, it becomes Volt Tackle. Raichu runs pretty slow normally, but he moves much faster during Volt Tackle. Storm across the screen to catch your opponents, chase after your electro ball, or jump cancel it to open up even more options. Fade back with a wavedash to trick your opponents, or jump in with a shocking surprise attack! Down special is smaller than Pikachu’s thunder, but it packs a wallop. The storm cloud is a meteor, which sends opponents directly to Raichu for the explosive finisher! His aerials are all entirely fresh, but draw inspiration from his previous evolutions. Raichu is the slowest character in Beyond Melee, but with a great variety of unique tools at his disposal, Raichu is a complete package, and he packs a serious punch. 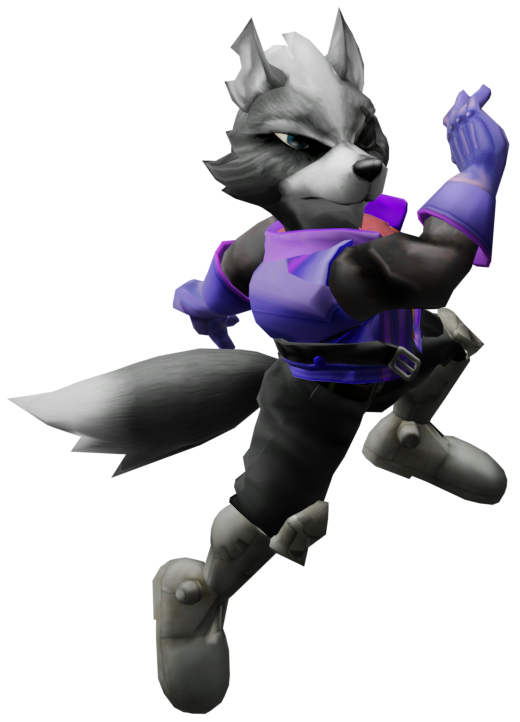 You’ve seen Wolf before, and our Wolf is a greatest hits compilation of what you love most about this character. Not to mention, for his appearance in Beyond Melee, he has a totally original model. All of his specials work how you’d expect, but have slight tweaks here and there to align better with Beyond Melee’s balance and design guidelines. Let’s cover a couple unfamiliar bits first. Forward air and up air send at just the right angle and knockback to create a really interesting DI mixup tree, making tough decisions for both players. Down tilt is a sex kick launcher with a fresh animation. Dash attack’s animation is inspired by Ultimate Wolf. Bair is more of a swinging kick, with no lingering hitboxes, that sends at a low angle and hurts like hell to get hit by. Otherwise, he’s mostly what you’d expect. Players who loved Wolf in any of his other iterations will love him just as much in Beyond Melee. 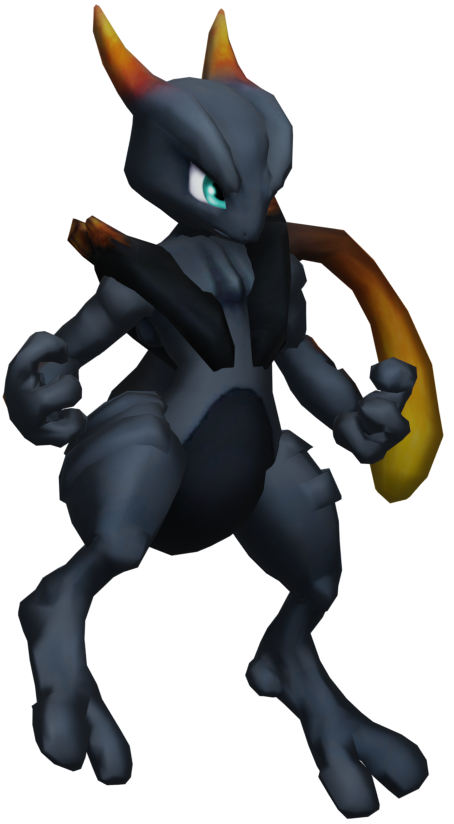 Shadow Mewtwo bursts into Beyond Melee with a diverse and unique moveset. He has similarities to Mewtwo in appearance, but in gameplay he couldn’t be more different. Shadow Mewtwo’s signature mechanic is his ability to Mega Evolve! That’s right, Mega Evolution is making its first appearance in competitive Smash! You can mega evolve with down b, once you’ve dealt 60% to your opponent with A button attacks. Watch your meter rise with damage, and plan your match around your next Mega Evolution. Mega Shadow Mewtwo deals more damage and knockback on all of his moves than his normal form, and he moves faster as well. You remain in your mega form unless you whiff attacks, get hit, or your opponent dies. You can refill meter while mega evolved by landing more attacks, though, so if you want to keep the momentum in your favor, make smart plays. Mega evolution is great, but that’s not the only surprise up his sleeve. Shadow Mewtwo, ironically, has no Shadow Ball. Instead, press neutral special to activate Light Pillar. As you hold B, an indicator travels along the stage. Let go of the button to activate the beam! It’s solid for both shield pressure and combos, however it’s quite slow to start up, and slow to cool down. It’s a commitment, but you can use this move to extend tech chases, combos, or to punish campy opponents! Next, he has a completely reworked up b. It’s based on some of his moves from Pokken. He has less positional mixups than Mewtwo does with his teleport, but don’t let that fool you into thinking he can’t recover. You have restricted angles to start with, but you can curve through the air with the control stick. For his normals, a stylish new back air with startling range allows Shadow Mewtwo to set up edgeguards, or finish them. He gets a new down tilt that’s slower to start and finish than Mewtwo’s, but it’s great at setting up into his scary aerial finishers… even scarier when he’s mega evolved. Based on his sword moves from Pokken, Shadow Mewtwo gets an ice cold up tilt to juggle opponents or send them to the stars. A new upsmash more in line with his other two smash attacks, a fiery forward air that launches forward, a startlingly strong forward throw- and so many more unique aspects that set this character apart from Mewtwo. With all of these new moves, and mega evolution as the cherry on top, Shadow Mewtwo brings a lot of new concepts to the Melee landscape, which makes him a must-play in the BM roster.

In local versus, push Dpad left on the character select screen to turn off tap jump. Push dpad left again to turn it back on. Push dpad right to toggle auto L cancel. In rollback online matches, hold dpad left until the announcer says “GO!” to turn off tap jump, or hold L to turn on ALC. To use both, simply hold both L and dpad left. The ALC and tap jump toggles are per-player, so if you don’t want to develop bad habits, but your opponent is more used to Ultimate or Project M, or just doesn’t want to break their hands, they can lighten the load for themselves. If a player has tap jump off or auto l cancel on, small indicators will appear on the hud below their percent. This way, even if the tournament takes place online, TOs can tell if a player has turned on ALC, and players will be able to tell if they’ve successfully activated the toggles. 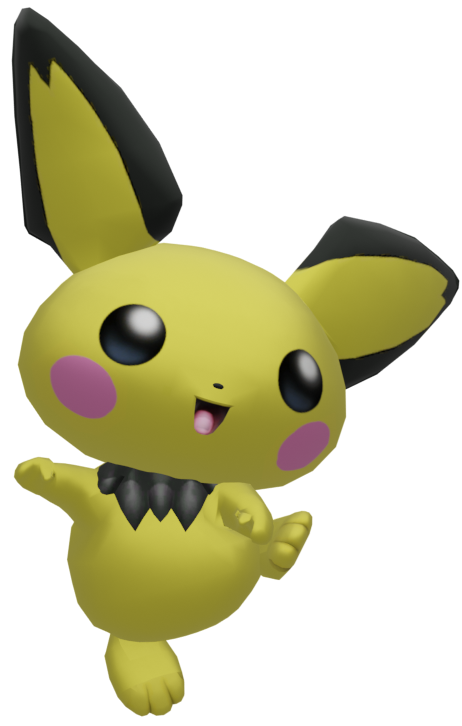 Beyond Melee is more than just additional characters, it’s a complete rework of Melee as a game in a variety of ways. Our goal for these changes is firstly for characters to be fun to play against, but also a balanced game which adheres strictly to the spirit of Melee- fast-paced, up-close, decision based combat. Many characters have more extreme changes than others to reach this goal, some so extreme that they haven’t been finished in time for Demo 1. Stay tuned for future releases. 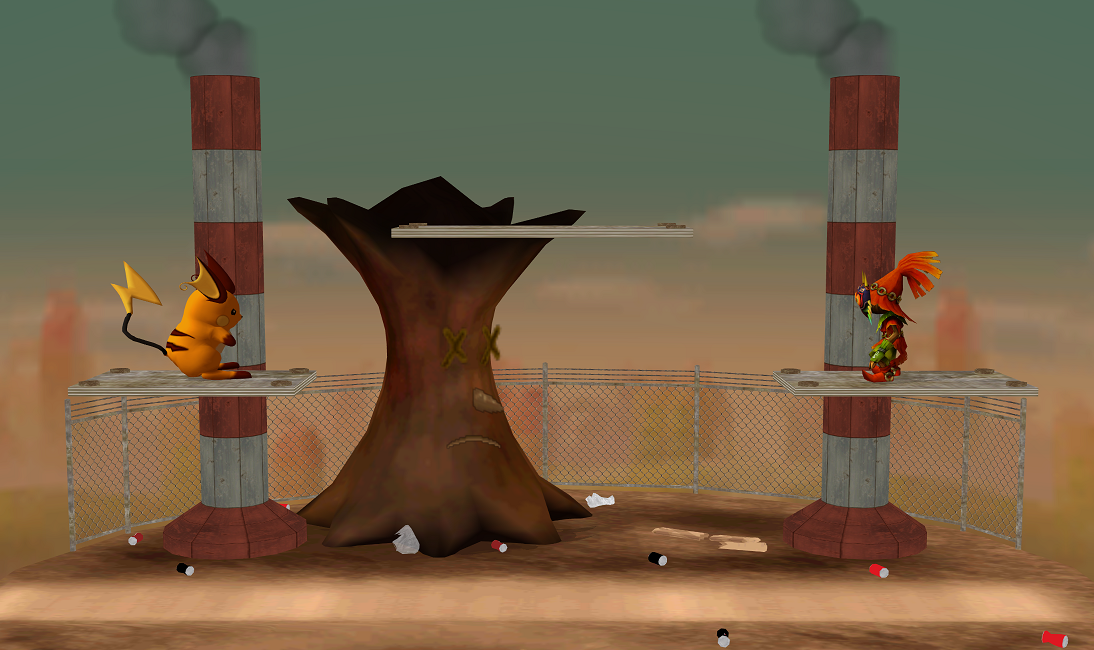 Beyond Melee has a wide variety of new stages to play on, with more to come soon!

Beyond Melee has a wide variety of new stages to play on, with more to come soon!